Our Staff
|
History
|
BBB Accreditation
|
Why Choose Us
|
Contact Us

Once you request the services of Spear-Miller Funeral Home, we will immediately put our experienced funeral professionals to work for you. A single, dedicated individual will stay in contact with you every step of the way and guide you through the decision-making process. He or she will carefully explain your options, make recommendations at your request, take care of all the small details, and ensure that you and your family’s personal touch is always present.

Richard Miller is a lifelong resident of Fairfield, Dick is a graduate of Fairfield College Preparatory School ’82 and a 1986 graduate of The Citadel with a Bachelor of Arts degree in History. He served as a Lieutenant in the United States Navy. Dick has been associated with the Spear Funeral Home since 1991. Serving as a funeral director for over 25 years, Dick holds membership in the National Funeral Directors Association, Bridgeport Area Funeral Directors Association and the Connecticut Funeral Directors Association, where he also served on the Executive Board.  In 2012 Dick achieved status of a Certified Funeral Service Practitioner (CFSP).  A lifelong member of St. Thomas Aquinas Church, he serves as a lector and Lay Council President. Community activities involve: Fairfield Lions, Fairfield Kiwanis, Fairfield Prep Alumni, Fairfield Harbor Commission, Fairfield Ethics Commission, The Fairfield Chamber of Commerce and the Gaelic-American Club of Fairfield. Dick has served as the Master of Ceremonies for the Fairfield Memorial Day Parade and is a member of the Board of the Bridgeport Symphony. He is also a member of the Port 5 Navy Veterans, American Legion Post 143 and the Brownson Country Club. In his spare time, Dick enjoys golfing, fishing, running, and spending time with his family. Dick and his wife Betsy Browne Miller reside in Fairfield. He has two children, Shannon and Sean.

Upon Jon Spear’s retirement from the day-to-day operations, Dick assumed ownership of the business, and feels privileged to continue the caring and compassionate tradition began by Albert W. Spear in 1938.

Leah Michalewicz was born in Bridgeport  and raised in Ansonia. She graduated with honors from Hill Regional Magnet High School where she studied at the Yale Medical School working with Medical School student in the Anatomy Lab. While at Yale Medical School, and after losing her grandmother, Leah became interested in the funeral profession and the caring of others. Leah received her degree in Mortuary Science from Lincoln College of New England and joined the Spear-Miller team as an apprentice  and following licensure remained on the Spear-Miller staff. Leah possesses the qualities to be a successful funeral director and truly loves assisting families with all their needs. In her spare time Leah enjoys performing professional manicures, working along side her dad in his auto mechanic shop and spending time with her younger sister Shannon. 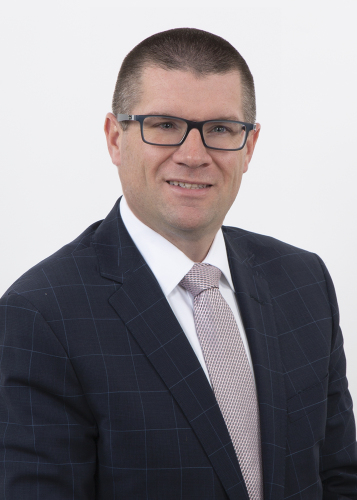 Brendan grew up in Hamden and graduated from Fairfield Prep in 2002. Following high school, he received a Bachelor of Arts degree in Political Science from Quinnipiac University. During his time at Quinnipiac, his interest in funeral service never strayed far as he continued to help local funeral homes in the New Haven area as a pallbearer and funeral assistant. Though his professional passion to help others in their time of need was strong, Brendan recognized that as a young man, his friendliness and ability to make people laugh would be well-suited for a younger crowd. He moved to Orlando and joined the Walt Disney World team in the Magic Kingdom.

After a few memorable years of putting smiles on the faces of children, Brendan returned home to focus on a career in funeral service and to let his compassion for others flourish. He earned an Associate of Applied Science degree from Briarwood College 2010 and was licensed as a funeral director and embalmer in 2011.

Brendan subsequently gained valuable work experience at funeral firms in Stamford and Greenwich, prior to joining the staff of Spear Miller Funeral Home in 2021. He is an advocate for advanced planning and specializes in making the process simple and beneficial to each client he serves. In addition, as a Certified Funeral Celebrant, Brendan is dedicated to creating unique and meaningful celebration of life experiences. Having earned his designation of Certified Funeral Service Practitioner, Brendan is passionate about continuing education, community events and community engagement. He is also a certified crematory operator.

Brendan is a member of the Gaelic American Club, member and past President of the Rotary Club of Monroe, past President of the Monroe Chamber of Commerce and past chair of Project Warmth Monroe. Brendan has also served on the faculty for funeral service education at Lincoln College of New England and Goodwin College.

Nicole Commercio brings with her over thirteen years of experience providing individual, couples, and group therapy. She specialized in bereavement and has experience in hospice care. Her private psychotherapy practice is located conveniently in the center of town in Fairfield. As part of Spear-Miller’s Aftercare services, Nicole conducts ongoing support groups at no cost for those who have lost loved ones. 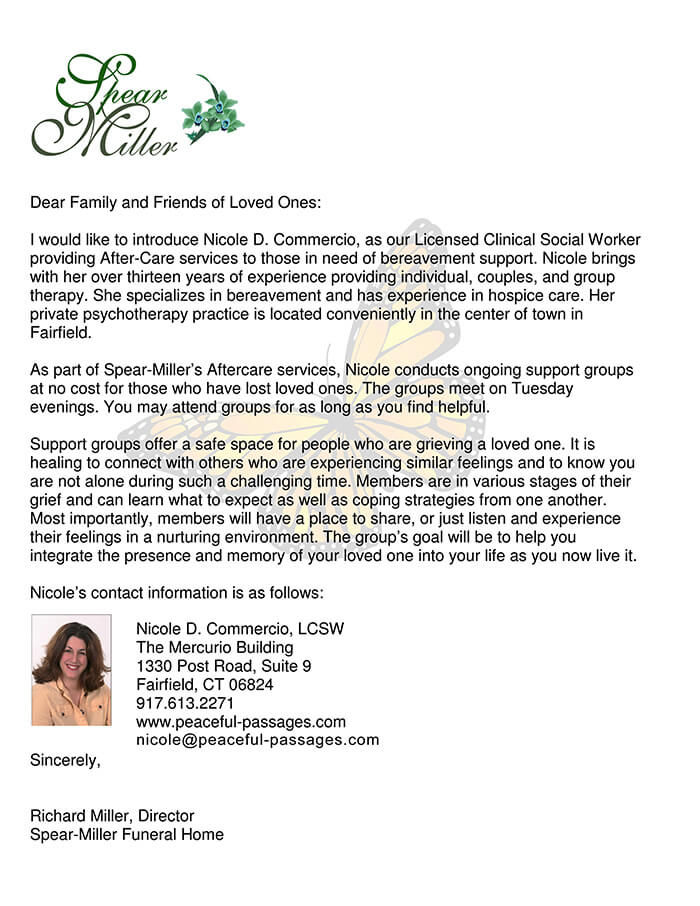 Our Staff
History
BBB Accreditation
Why Choose Us
Contact Us

We stand ready to assist you. If a death has occurred, please call us on the number below: